Every dollar counts, and we couldn’t do it without you! Give a donation today!
Donate

Are you in need of non-emergent medical transportation? Please, get in touch with us and apply for your FREE flight!
Request A Flight

Sign up as a Volunteer and help us continue to serve members of your community!
Volunteer

United By Care and Love 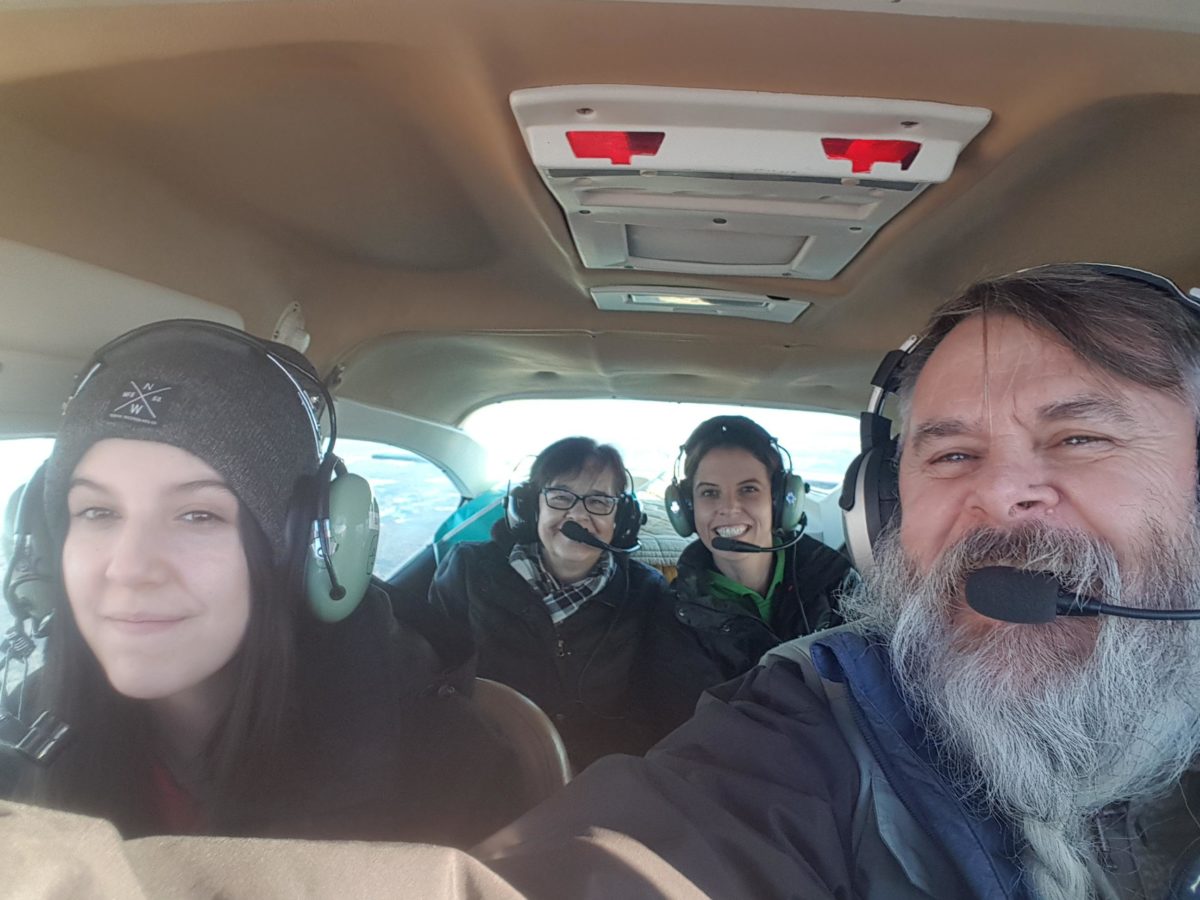 My Mother Bev Chauvin had open heart valve replacement surgery October 18th at the Mazankowski Alberta Heart Institute in Edmonton. She received a new valve successfully; she was released very early post operation. On her arrival home Mum needed an ambulance to the hospital for heart attack symptoms, she was monitored and released.

During this same time, my brother Richard took my sister Evelyn to the hospital. Evelyn was having a stroke. She was on a breathing machine in intensive care in a coma. My mother went to see her every day despite warnings to stay home to recover for her own post surgical health. Mum was there almost constantly. Mum became very ill, over Christmas. She was in emergency with stomach flu symptoms. Her illness put strain on her surgical sight sternum wiring and incision. We postponed Christmas to have a “Merry new year”.

January 6th my sister Evelyn had a third mini stroke. The morning of the 7th of January Evelyn was transferred to the Havard Jonson Brain Injury Rehabilitation Hospital. Mum flew there with her despite the fact she was still supposed to be recovering from her surgery. I don’t know how Mum had the strength to be so persistent in caring for my sister; but she did. I was so concerned for Mum I wrote to Angel flight in hopes of taking travel strain off of Mums shoulders. I had no idea the application would be responded to as swiftly as it was.

My mother phoned me crying, she was crying tears of relief and joy that Angel Flight was responding. Her words that I remember most “I know there is a God; because Angel Flight is going to help fly me home!” Those words affirming such compassionate assistance were such a blessing! I don’t have the words to express the gratitude from our family. We are so grateful and appreciate the kindness so much. My mother is telling everyone she can about the assistance she received, when my brother and I did not have the means to help more. Angel Flight was there for us!

Mum said “Mike helped her with everything”. He drove for her, and brought her to the plane. He made sure she did not lift her luggage. He made sure she was well cared for on the trip back home from the Halvar Jonson Brain Injury Rehabilitation Hospital. My brother and I were relieved that some of the strain of travel had been relieved by the safe return of Mum. Mum had high praise and positive things to say about Mike and Angel Flight. Mum said “he showed her how to get on the plane and, gave a kind of tour of the plane. He described how the plane worked”. They flew low enough to see details like moose, and that at the end of the flight. He helped her down off the seats, and off of the plane. “He was such a nice gentleman” she said.

We are just grateful to be together at home; we will face these health concerns as a family united by care and love. What ever it takes we will do it together.  Angel Flight and their mission to help those as desperate and vulnerable as my Mother and sister are, is above and beyond anything we could have expected as a saving grace.

I would recommend requesting assistance to anyone else in displaced medical need situations.

Angel flight is our hero’s!